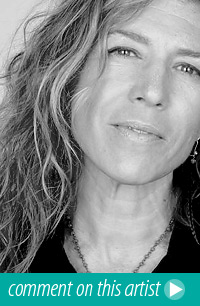 Ashley Cleveland : then and now...

Ashley Cleveland, born February 2, 1957, is an American singer/songwriter best known as a background vocalist and Grammy-winning gospel singer. Ashley Cleveland was born in Knoxville, Tennessee. She was married to Kenny Greenberg on April 27, 1991, and has three children.

"An American singer/songwriter best known as a background vocalist and Grammy-winning gospel singer with contributions to over 300 albums."

Her career includes vocal contributions to more than 300 albums, including the Dove Award winning albums Songs From the Loft (1994), The Jesus Record by Rich Mullins and A Ragamuffin Band, 1998.  As part of John Hiatt's band, she has also made several widely-seen television appearances including, Austin City Limits, Late Night with David Letterman, The Arsenio Hall Show and Saturday Night Live.  Steve Winwood contributed duet vocals and played the Hammond B3 organ for the song "I Need Thee Every Hour" on Cleveland's 2005 album, Men and Angels Say.

As the Grammy Award's