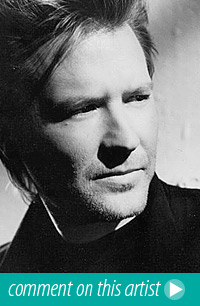 Michael Anderson : then and now...

Michael Anderson is a songwriter, artist, producer and author who has written songs for John Fogerty, Juice Newton, Pam Tillis, Phil Seymour, Rebecca St. James and others in rock, pop, country and CCM. He has been a Staff Writer for EMI and BMG Publishing in Nashville as well as MCA/Universal and Criterion Music in Los Angeles. He wrote the #1 country single “Maybe It Was Memphis,” several #1 CCM singles and won a Dove Award for “Hard Rock Song of the Year.” As a solo artist, he has released six albums, including two on A&M Records, two on EMI/ Forefront and two independent releases. Michael is also an author of screenplays and books, including Michael Anderson’s Little Black Book of Songwriting, and works as a music business career and song consultant. At MI, he teaches Professional Songwriting and Artist Development.

"Michael Anderson is a songwriter, artist, producer and author who has written songs for John Fogerty, Juice Newton, Pam Tillis, Rebecca St. James and others in rock, pop, country and CCM."

From critic / writer Dave Lowman's own mouth..Sometime around 1987 I was working at a very large and popular christian Bookstore in Southern California when a copy of Billboard Magazine came across my desk. Along the bottom of the front page was an ad for an artist on A&M Records. The slogan on the ad was something like, “There’s Nothing Funny About the End of the World.” I was intrigued."

I immediately called my local one-stop mainstream distributor and asked about the project. He hadn’t heard about but did make a couple calls for me. It would be released a few weeks later, but he did call the next day and said he got an advanced copy of the album for my to review before ordering. I drove over right away and put the CD in my car. The content seemed “Christian” to me but i had no real proof the artist was a Christian. Songs were about faith and the title track mentioned Babylon and Armageddon.

I ordered some for the store despite the “hell” word being present and not receiving any confirmation about the faith of the artist. It sold well. In fact, it sold extremely well. My staff loved it and pushed and I don’t think a customer came in that didn’t hear something about it one way or the other. It charted in CCM Magazine just because of our sales alone.

About a month later i received a phone call. On the other end of the line was a man with a very low voice and calm demeanor. He introduced himself as Michael Anderson and asked why in the world was i selling his record at a Christian Bookstore. I was a bit stunned and taken aback. “Don’t get me wrong,” he said, “I just wanted to know how you knew I was a Christian?

“As I found out later his manager told him the album charted in CCM Magazine and that was because of the sales from one store. He tracked down the store and called. That started a friendship that would last for several years. My wife and I would travel to Hollywood regularly to hang out with Michael and his wife. In fact, we were invited by Michael his wife’s birthday party at an amazing gourmet Japanese restaurant in Bel Air and were seated at a table with Michael and Stormie Omartian.

Michael’s debut project on A&M Records is a powerful, straight ahead Americana rock and roll in the same vein as the best from John Mellencamp and Bruce Springsteen but with a more blues and country influenced sound. Anderson’s voice will huff, puff, spit, scream and squeal with an edge that pierces as it communicates with passion few have reviled. On higher notes he is known to have his voice crack in trademark fashion. But on the mellower tunes he can bring it down to soft, almost Barry White-like smooth growl.

Anderson would record two releases for the mainstream market on A&M and then two projects for the Christian market on Forefront. He made his way there after I gave a copy of this album to Eddie DeGarmo at a Benson records sales conference. “Sound Alarm” kicks off with the title track, a raucous warning of impending doom as the world descends toward Armageddon. This apocalyptic tune receives its theme from the “end times” perspective popular among many modern evangelicals. Anderson rough edged vocals sing: