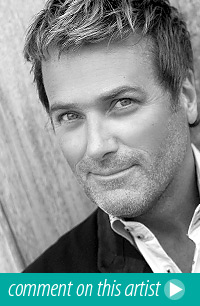 Michael Whitaker Smith was born October 7, 1957 to Paul and Barbara Smith in Kenova, West Virginia.  A sister named Kim would follow.  Michael was a typical boy – active in baseball, his family’s church activities, and playing piano.  But in not-so-typical fashion, he wrote his first song at age five.  At the age of ten, he made a decision to give his life to Christ.  He dreamed of playing professional baseball.

"Smith is a three-time Grammy Award winner, and has earned 40 Dove Awards...over the course of his career, he sold more than 13 million albums and recorded 29 No. 1 Hit songs, fourteen gold albums, and five platinum albums"

Michael attended college at Marshall University in West Virginia but after one semester dropped out to move to Nashville and pursue a career in music. (side note trivia: In 1992 Michael received an honorary Doctorate of Music degree from Alderson-Broaddus College in Philippi, West Virginia.)

The years 1979-1981 are best written by Michael himself in his book, It’s Time To Be Bold.  From chapter 1, we read: While playing keyboards for the group Higher Ground, I signed my first songwriting contract with Paragon/Benson Publishing Company.  I thought I’d died and gone to heaven.  I was knocking down $200 a week to do something that I loved.  Writing songs for a living meant that I didn’t have to wait tables anymore, or work at Coca-Cola, or plant shrubs with a landscaping company.

I thought my life had peaked and God didn’t have to do anything else for me.  I wasn’t looking for a record deal, a higher salary, or even a girlfriend – and especially not a wife.  Writing music, I was as content as I’d ever been, and I labored at it sixteen hours a day.  Then one afternoon while I was working in my office, Deborah Kay Davis walked by.  I thought she was the most beautiful woman I had ever seen.  When she passed by, it was all over for me.  I was blown away.  Totally head over heels in love. I frantically picked up the phone and called my mother in West Virginia.

I left my office and went searching for this girl in the warehouse.  Sherlock Holmes couldn’t have done a better job of tracking her down, and eventually I found myself standing outside the ladies’ restroom, waiting for her to emerge.  She walked out. I introduced myself.  We were engaged three and a half weeks later – and married four months after that!

In 1982, Michael was asked to play keyboards in a band that was backing up young artist Amy Grant.  He also continued to write songs for himself.

The story goes that Amy’s managers, Mike Blanton and Dan Harrell could not find a Christian record label that would sign Michael or a young New Yorker named Kathy Troccoli.  Believing so much in these two young talents, they started Reunion Records.

Michael made his very first record in 1983 and it was called “Michael W. Smith Project.” Michael wrote all the music and wife Debbie wrote the lyrics.  The now famous song “Friends” debuted on this album.  Michael continued to tour with Amy, now as her opening act.

From there – the records kept coming, and then the books as well:

In the midst of 22 albums and ten books as well as the awards (Dove awards and Grammy awards among them), Michael and Debbie were blessed with five children: Ryan, Whitney, Tyler, Emily and Anna; and in recent years the family has continued to expand as his children have expanding families of their own.

In 1994, Michael founded a teen club called Rocketown in an effort to provide a place for teens to gather in a safe, loving environment.  A warehouse in the Cool Springs area of Brentwood, TN was converted into a dance floor, rooms with pool tables and a coffeehouse.  After three years, the club closed.  The leadership continued to build a ministry devoted to kids, and a new site in downtown Nashville that reopened in 2003. Visit Rocketown at www.rcktwn.com.

In 1996, Michael founded Rocketown Records with Reunion executive Don Donahue and launched their first artist, Chris Rice.  Michael and Don shared a dream to be part of a label where great songs were the focus, where artists, not acts, were developed.  They wanted a label that felt like a family.  And what a family it is!  Go to www.rocketownrecords.com to learn more!

In 1999, a prayer group of Michael and Debbie’s that had been meeting at their farm, had blossomed into what they felt had become a church body.  Gathering up some leadership, Michael and Debbie helped start New River Fellowship with close leadership by Pastor and mentor Don Finto, former senior pastor of Nashville’s Belmont Church, where Michael and Debbie had attended for many years. Visit New River Fellowship at www.newriverfellowship.com.  Throughout his career, Michael has had the opportunity to sing for Presidents and national leaders, and counts among his friends the Reverend Billy Graham and his son, Franklin Graham.  He is active in Billy Graham Crusades as well as The Samaritan’s Purse, the ministry headed by Franklin Graham.

But for all of Michael’s accolades, for his involvement in his teen outreach Rocketown, leadership in his local church body, the business of being an artist, an author and a record label executive, Michael sums up his life as this, “to be remembered as a God-fearing man who loved his wife and kids well.