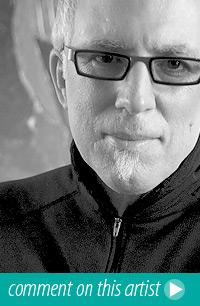 Rick Cua, born December 3, 1948 in Syracuse, New York, is an American Christian rock singer, songwriter, bassist, author, and ordained minister.  He is a former member of the southern rock band, Outlaws, whom he joined in 1980, but left in 1983 to pursue a full-time career in Christian contemporary music, the year after, wherein he gained popularity throughout most of the 1980s as a leather-jacket-wearing rocker with an arena rock sound featuring big, shout-along choruses.

Upon signing to Reunion in 1988, his works began to take on a softer, more radio-friendly tone that included "sentimental ballads and pop-rock anthems in the style of Michael Bolton." Cua left Reunion in 1992, creating his own label, UCA Records, on which he recorded three studio albums in the 1990s but received little radio play. He as also won several Dove and Grammy Awards.

Cua took a hiatus from recording in 1998 and went to work as Vice President of the Creative Department at EMI Christian Music Publishing, where he stayed until 2003. Following that executive stint, Cua became focused on managing his own two companies: Rick Cua Entertainment, which manages artists and works in music publishing, film and TV licensing; and All For The King Music, offering coaching and inspiration to lay musicians through workshops and free electronic delivery of original worship music.

Celebrating his 25th year in ministry, Cua released his twelfth album, Won't Fade Away, in 2007. It was his first album in ten years.

In the mid-90's Rick and his wife Diana formed UCA Records(United Christian Alliance) whos mission was to support Christian artists with existing ministries through record production, marketing and sales. Since that time they have been dedicated to helping people attain their dreams and fulfill the unique calling that God has put within their hearts.

Rick and Diana have been married for 41 years and in ministry together since 1981. Rick has recorded 12 solo records with multiple #1 songs. For years, Rick & Diana have been dedicated to using music as a ministry tool. The Cuas have two daughters, a son-in-law, 2 Grandchildren, live in Franklin, TN and attend Grace Chapel church in Leiper's Fork where Rick serves as Pastoral Care Pastor.