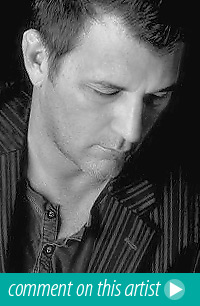 Rick Elias is a Nashville-based singer and songwriter.  From 1993 to 2002, Rick is probably best known as a founding member of "A Ragamuffin Band" formed by the late Rich Mullins in the early '90's. Rick performed with Rich until his untimely death in September 1997.  At that time - at the request of Rich's family, estate, and record label - Rick resumed the production of Rich's posthumous release "The Jesus Record".  The Jesus Record went on to win 2 Dove Awards, and had two # 1 songs, "My Deliverer" (sung by Rick) and "Nothing Is Beyond You" (sung by Amy Grant).  The Rags released one more album, "Prayers Of A Ragamuffin" in 1999, produced by Rick.  It included his song "Make Me An Instrument" - a musical rendering of St. Francis' Prayer and St. Patrick's Breastplate - which resulted in The Rags being invited to perform before the Pope and 2.4 million people in Rome, Italy for World Youth Day in August, 2000.

“Rick is probably best known as a founding member of "A Ragamuffin Band" formed by the late Rich Mullins in the early '90's. Rick performed with Rich until his untimely death in September 1997l"

Rick was also given the production reins for the official album for WYD, one which included him being able to produce one of his musical heroes, Aaron Neville, as well as many others who contributed generously to the project. Also, during this time ('95-'03), Rick contributed two songs to Bob Carlisle’s multi-platinum, #1 album "Butterfly Kisses (Shades of Grace)".

Ricks music was featured in the 1996 movie That Thing You Do! (which was written and directed by Tom Hanks), Dawsons Creek, "My Big Fat Greek Wedding", as well as numerous other albums, independent films, and TV shows and ads worldwide.  Rick has also produced artists such as Rich Mullins, Amy Grant, Aaron Neville, Michael W. Smith, and many others.

Along with all this, he has written, performed, and produced three solo projects over the last decade, and is currently working on a fourth project. Rick's work has been nominated and awarded by the GMA, UCMVA, and the Nashville Music Awards, and his first solo record was voted as one of the top 100 greatest albums in Christian music by CCM Magazine.

Rick is currently an adjunct instructor at the Contemporary Music Center in Brentwood TN. As well as teaching songwriting and production, Rick frequently gives songwriting seminars in person and online.  He continues to produce projects, and to perform both solo and with the Rags.  Rick spends his time writing and producing music in Nashville TN, and continues to perform solo throughout the U.S. and internationally.