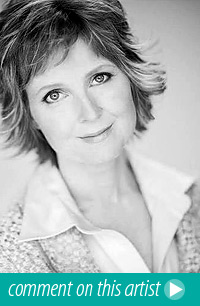 Since 1980, Twila Paris has released 22 albums, amassed 33 number one Christian Radio singles, and was named the Gospel Music Association Female Vocalist of the Year three years in a row.  Many of her earlier songs such as "He Is Exalted", "We Will Glorify," "Lamb of God," and "We Bow Down," are found in church hymnals or otherwise sung in church settings.

"Since 1980, Twila Paris has released 22 albums, amassed 33 number one Christian Radio singles, and was named the Gospel Music Association Female Vocalist of the Year three years in a row."

As a child she released her first album, Little Twila Paris, in 1965.  The album included songs drawn from among those she sang with her family in their evangelistic outreaches.

Paris released her first full-length album, Knowin' You're Around, in 1980, and along the way she has written books, recorded children's music, and created worship songs.  Her song "God Is In Control" won a GMA Song of the Year award in 1995 and her 1992 Sanctuary release won the GMA Praise & Worship Album of the Year.  She has won five GMA Dove Awards and three American Songwriter Awards.

In the 1980s and 1990s, Paris released mainly contemporary Christian pop songs.  But in recent years, she has focused on recording new versions of some of her worship standards and writing new praise and worship music.  Her 2005 album He Is Exalted: Live Worship collects a number of favorite songs commonly used in praise and worship of Paris's and presents them in a more typical style of live worship music.  After her song "He Is Exalted" was used in churches in Brazil, Paris re-recorded it in the Portuguese translation they were using.  This version appears on her 1992 album Sanctuary.

Although associated for much of her career with Star Song Communications, EMI switched her to Sparrow Records in 1996, before her contract ended after 2003. In 2005, she switched to the praise and worship label Integrity Music for He Is Exalted: Live Worship.

Twila released Small Sacrifice on December 26, 2007, which was available only through her Web site and at Lifeway Christian Stores.  This album married the two parts of her career by including both inspirational pop/adult contemporary songs and original praise and worship compositions.  Her first radio single from Small Sacrifice was "Live to Praise."  Small Sacrifice was released for wider distribution by Koch Records on February 24, 2009.

In 2012, Twila released a patriotic-themed project that includes two new cuts ("God of Our Fathers" and "America the Beautiful"), and ten cuts that Twila hand-picked from other projects. The purpose of the project is to inspire patriots with themes of God's protection and love, even in difficult times.

In the 1980s and 1990s, Twila toured extensively.  As a new artist, she opened for the Imperials. After receiving her first #1 hit, she began headlining her own concert tours, with such notable opening artists as Wayne Watson, Clay Crosse, Phil Keaggy, Avalon, Aaron Jeoffrey, Fernando Ortega, Out of the Grey and Michele Tumes.  She was featured in the Young Messiah tour and co-hosted with Steven Curtis Chapman both the My Utmost for His Highest and Child of the Promise tours.  In the 2000's, she continues to tour but not as extensively.  In 2011-2012, Twila participated in the Christian Classics tour with Steve Green, Wayne Watson and Michael Card.

Paris has created a body of work in a modern hymn style.  Her compositions are included in hymnals used by several Christian denominations, and various Charismatic churches.  Paris was influenced in her early career by the music of Keith Green, Kelly Willard, and Jamie Owens-Collins.  Her single, "Do I Trust You" was written in response to Keith Green's untimely death in 1982.  Willard and Owens-Collins sang background vocals for her on her Keeping My Eyes On You album and sang as a trio on the hymn "Leaning On The Everlasting Arms" on The Warrior Is A Child.

Twila Paris is the daughter of Oren II and Rachel Inez Paris.  Oren Paris II is the founder and Chancellor of Ecclesia College in Springdale, Arkansas.  Twila has been married to Jack Wright for more than 25 years, and has a son, Jack Paris Wright who was born in 2001.  She has three siblings — Starla Novak, Oren Paris III, and Angie Paris Snyder.